Not long after phones first learned how to take photos came the first phones with dedicated selfie cameras. But the arrival of 3G networks meant that not just any camera would do – a core feature of 3G was the native video calls. Barely anyone did that, but we got some interesting phones out of it.

Like the Sony Ericsson V800, for instance, which had a camera that normally pointed away from you to take photos, but could be rotated to point towards you too. Back then you had to rotate it manually, that was the norm.

And it remained so until the Oppo N1 arrived. The phone is notable for two things, its camera and its software, plus a number of other slightly less important (but still curious) highlights.

Oppo advertised the N1 as “world’s first rotating smartphone camera”. That’s not quite right, the Symbian-running Nokia 5700 has it beat by 6 years, for example. But this was certainly the first cam to be rotated by a built-in motor. It was a complicated mechanism that involved 68 separate components and plenty of cables. In Oppo’s testing, the company found that the camera could withstand 100,000 rotations.

And what a camera it was. It featured a 13 MP sensor (1/3.06”) with a 6-element lens that was fairly bright for the time, f/2.0. The rotating mechanism could spin it 206° to aim the lens and dual LED flash at your mug, so you could take selfies to your heart’s content. Using the main sensor allowed for much higher quality selfies than competing phones could deliver. Especially in the dark. 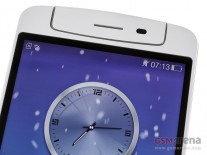 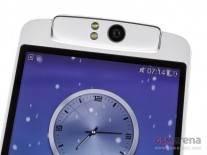 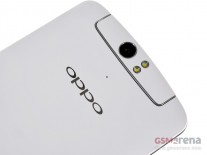 The motor was also cleverly used when taking panoramas – instead of having you sweep the camera sideways manually, it rotated all by itself at a steady pace. The Asus Zenfone 7 announced earlier this week knows this trick too (the N1 panoramas turned out pretty bad but that was due to poor stitching among other things, not the motor).

Interestingly, the Snapdragon 600 chipset inside the phone offloaded image processing to a dedicated chip that was co-developed by Oppo and Fujitsu. However, that didn’t work so well – photos were good enough, panoramas not so much, but (worst of all) the phone couldn’t hit a steady 30 fps when recording 1080p videos (it hovered around 27 fps). For context, the first phones capable of 1080p video came out in 2010 while the N1 was a 2013 model. 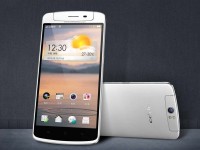 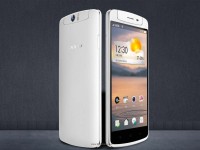 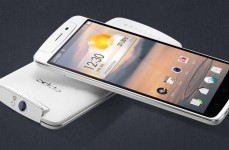 Anyway, let’s move on to the software. The Oppo N1 originally launched with Android 4.2 Jelly Bean skinned with an early version of ColorOS. If you didn’t like the skin, there was a pure Android option available thanks to CyanogenMod.

The N1 was the first Android to officially support CyanogenMod. There was even an Oppo N1 CyanogenMod edition, which launched with Google’s blessing. Would it surprise you to hear that one Pete Lau was heavily involved with this project?

Both ColorOS and CyanogenMod supported the O-Touch, which was essentially a touch pad on the back of the phone meant to improve one hand operation. Some rear-mounted fingerprint readers later developed a limited version of functionality, but the O-Touch was significantly larger and thus easier to use. You could scroll through a web page using the O-Touch

The O-Click was another neat addition – a small Bluetooth-connected fob, which could act as a remote shutter. You could use it as a key ring and you would get a warning whenever the O-Click and the N1 lost connection (i.e. you forgot either your phone or your keys).

The Oppo N1 featured a 5.9” 1080p display (an IPS LCD). If you’re thinking “that’s not so big”, it actually was. Remember that this was back in the 16:9 days, so the phone was 82.6 mm wide, which made it tricky to hold single-handed. It was a pretty excellent display, though.

The phone was powered by a 3,610 mAh battery, on of the larger power cells of 2013. However, this was before VOOC was introduced, so it came with a standard charger.

The Oppo N1 was one of the phones that put the company on the map. The excellent build quality and innovative features turned people’s heads. The third-party Android concept may have failed, but Oppo continues to improve ColorOS to this day (its camera hardware too).

PS. if you’re curious about other phones that had rotating hardware (not necessarily the camera), this Counterclockwise post covers various phones rotating in various ways. Another post covers rotating (and sliding) selfie cameras.