www.smartphonephotography.in See the World through your Smartphone
Home SMARTPHONE 20 Cases Of UK Coronavirus Strain In India, 8 In Delhi

India has recorded over 1 crore cases of coronavirus since the begining of the pandemic.

India has recorded 14 fresh cases of new coronavirus mutant strain -first reported in the United Kingdom in September – taking the total number of such cases to 20, the government said this morning. The new strain – believed to be significantly more infectious – has been spreading fast across the world despite fresh travel restrictions after the UK said earlier this month the virus was “out of control”.

On Tuesday, the government said six patients were infected with the mutant virus; these were the first cases to be reported by the country with the second-highest number of Covid infections after the United States at 1.02 crore. Of the 20 cases of fresh strain, eight have been registered by a Delhi lab and a Bengaluru lab has recorded seven cases. The numbers are likely to surge. But doctors have said there is no reason yet to believe that it is more lethal or will not be controlled by a vaccine.

Last week, India had temporarily banned flights from the UK. Thirty three thousand passengers, who arrived from the UK between November 25 and December 23, are being traced, the government has said, stressing the situation is “under careful watch”. 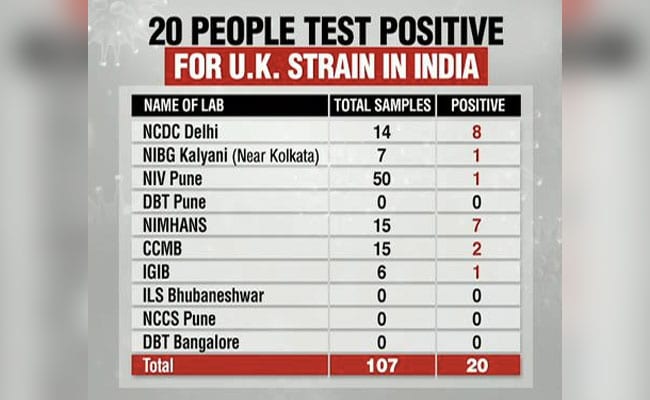 Genome sequencing will also be conducted on all international passengers who were symptomatic and tested positive for coronavirus in the 14 days from December 9 to 22. “It is easy to suppress the virus in the starting. Once the transmission is too widespread, it is hard to control,” Dr VK Paul, a member of Niti Aayog, said at the health ministry briefing on Tuesday.

On Monday, details were released of the genomic surveillance consortium- INSACOG, which has been formed to detect the presence of different strains of coronavirus in the country. Ten laboratories across the country will be carrying out genome sequencing. 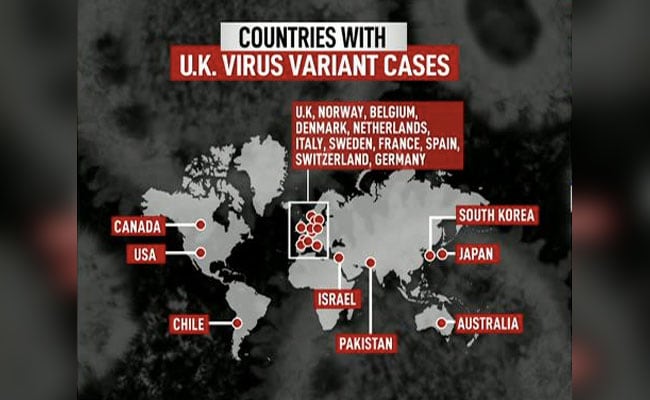 Other countries that have reported the new strain.

The new virus strain has sparked concerns at a time when India awaits a vaccine for the highly infectious disease. A drop in the cases was witnessed after the country saw a peak in September.

Quelling fears, the Health Ministry on Tuesday said existing coronavirus vaccines will work against mutated strains.  “There is no evidence current vaccines will fail to protect against COVID-19 variants from the UK or South Africa,” Professor K VijayRaghavan, the government’s Principal Scientific Adviser, said. Three vaccine makers – Bharat Biotech, Serum Institute of India and Pfizer – earlier this month applied to the drug controller for emergency use.

India has recorded over 1.02 coronavirus cases so far, and 1.48 lakh deaths linked to the disease. 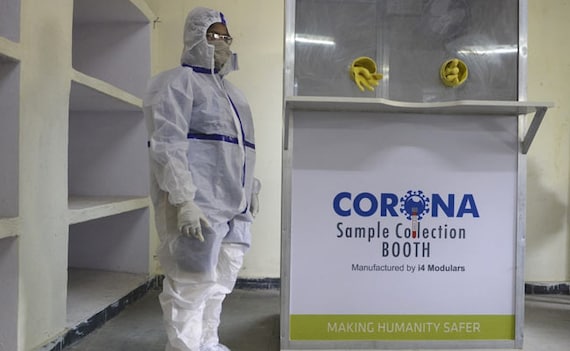