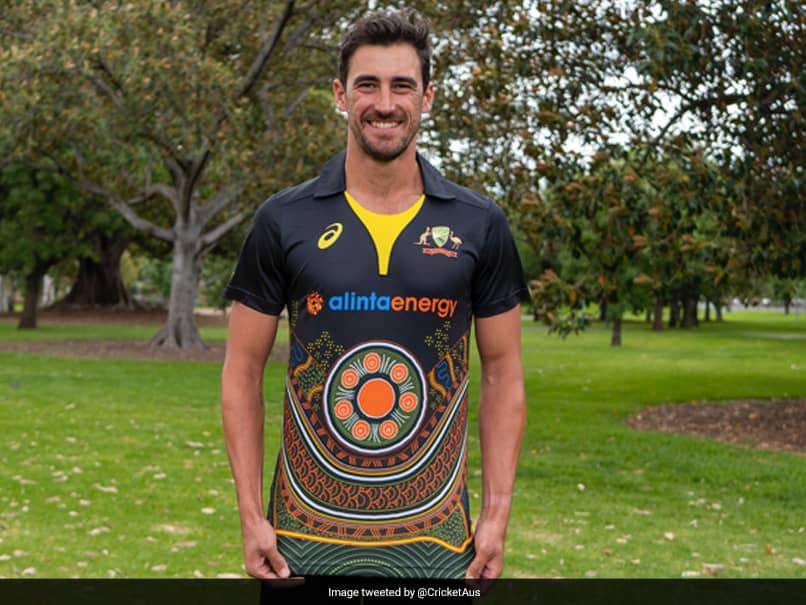 The shirt will continue the storytelling of the first-ever Australian team to tour overseas in 1868.© Twitter

Cricket Australia on Wednesday confirmed that the men’s team will be wearing an ”Indigenous” jersey in the upcoming three-match T20I series against India. The shirt will continue the storytelling of the first-ever Australian team to tour overseas in 1868. The 1868 Australian cricket team had made a three-month journey from Australia to the UK by sea and the side played 47 matches at some of the most famous grounds in world cricket. “Designed by Kirrae Whurrong woman Aunty Fiona Clarke and Butchulla and Gubbi Gubbi woman Courtney Hagen, the shirt continues the storytelling of the 1868 cricket team,” Cricket Australia tweeted.

Kirrae Whurrong woman Aunty Fiona Clarke, the great-great-granddaughter of Grongarrong (Mosquito), who was one of the members of the team that played in England in 1868, designed the original Walkabout Wickets artwork that will feature on the front of the playing shirt, ESPNCricinfo reported.

“Through the design, we wanted to create something that paid tribute to Aboriginal and Torres Strait Islander cricketers – past, present, and future. We have incorporated artwork that symbolises strength, guidance, and support through a connection to our ancestors, represented through the stars and the resilience of the 1868 team represented strongly. It was an honour to be able to co-design this shirt with Aunty Fiona,” ESPNCricinfo quoted Hagen as saying.

The first T20I between India and Australia will take place on December 4 at the Manuka Oval in Canberra.