Tarabai Sonawane is scared of the risk that the lack of internet has brought to her. For the last nine days, her three daughters are forced to leave the house for a few hours every day. The reason – access to the internet for e-learning.

From 13 April, the education department of the Maharashtra State Government started rolling out e-learning content to students from both Government and aided schools for grades I to IX. It’s hosted on the DIKSHA app – an e-learning platform of the Ministry of Human Resource Development.

Along with these videos, the respective school teachers send out several videos of science, maths, English, stories, images of paintings, assessments, online tests, PDF files of English sight words, and much more.

Tarabai’s daughters, Pallavi, Akshata, and Tejaswini, who stay in the Dhakale hamlet (Bhadole village in Hatkanangle taluka of Maharashtra’s Kolhapur district), go to their friends’ house to ensure they don’t miss out on the learning.

Why do they go out though?

Their stories reveal how education has become a privilege. Tejaswini’s father, Vilas, who works as a Gavandi (mason), ran out of mobile balance in the first week of April. Tarabai puts things in perspective, “There’s no work since 22 March. We didn’t have ration to eat.” Now in her mid-40s, she works as an agricultural labourer. An ill-planned lockdown forced her to buy grains on credit. “So far, we have bought grocery worth Rs 1,000,” she says. An extended lockdown brought in more risk, and now she anticipates that a further extension from 3 May might ‘kill them of starvation.’ 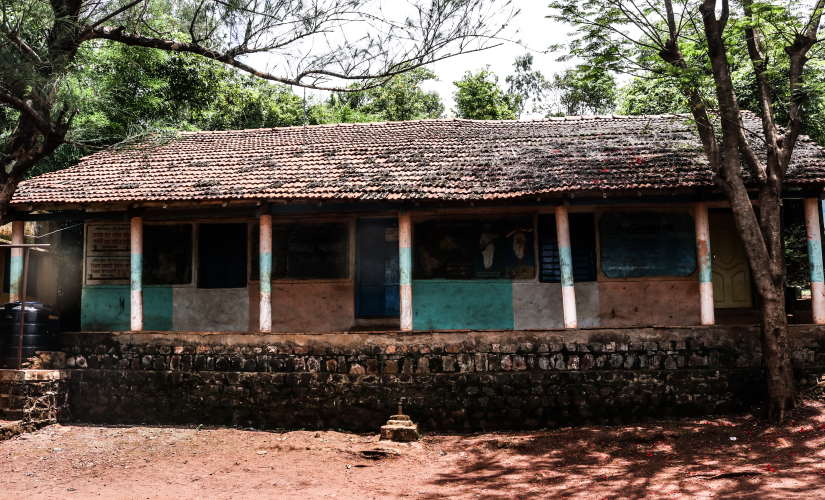 File photo of a zilla parishad school in rural Kolhapur

The Sonawanes can’t afford a mobile recharge now. Every money ill-spent means inviting starvation. Also, it delays the time by which they have to repay the grocery shopkeeper.

Although Tarabai’s daughters cover the face with a handkerchief or stole, her fears resurface in the conversation. “Shikshan tar jhala pahije (The education should happen),” she says on the call. She’s particularly scared about her younger daughter, Tejaswini, who’s in grade VII at Vidya Mandir, Dhakale, because her friend Sanika lives on the opposite side of the hamlet (500 metres away). “It’s risky so she goes out early in the morning or the evening,” she says. “What can we do?”. In the afternoon, the police presence makes it difficult for the kids.

Her elder daughter Pallavi who is in grade XII and enrolled in Indira Gandhi Junior College, Vadgaon in an art course, says, “The teachers send us videos and assessments on phone. I’ve to go to my friend’s house to watch this.” For the Sonawanes, bargaining with social distancing comes at a cost which she can’t quantify anymore – the cost of inequality.

Education never came easy for Vikram Sonawane, 18, who awaits his grade XII result. For the past two years, he has been working odd jobs to support his junior college education and family. Today, he has many more responsibilities than just choosing the stream he wants to pursue post-XII.

Two months before giving his board exams in March 2020, he took a break from a firecracker factory in Vadgaon, where he worked as a labourer.

Immediately after his exams got over, he had planned to find a job for helping his family. There was no ‘vacation’ or ‘de-stress’ time for him. It was from the second week of April when his younger brother Suraj’s school teachers started sending the curriculum, videos and reading material on WhatsApp. Vikram had run out of mobile recharge in the last week of March, and recharge now seems farther than his hopes of the lockdown being revoked on 3 May. The pandemic and the subsequent lockdown have forced several people to take loans for buying grains and medicines in the hamlet already.

Suraj, unfortunately, has been finding it difficult to cope up with this. A grade VIII student, schooling has been no less than a challenge for him. He’s a student at Shrimati Indira Gandhi Madhyamik Vidyalaya in Vadgaon. For a few months, he could afford the bus fees of Rs 70 monthly, but since January he had to reduce it to a one-way trip. “While returning, I walk 5 km to my home,” he says. “We can’t afford it.” 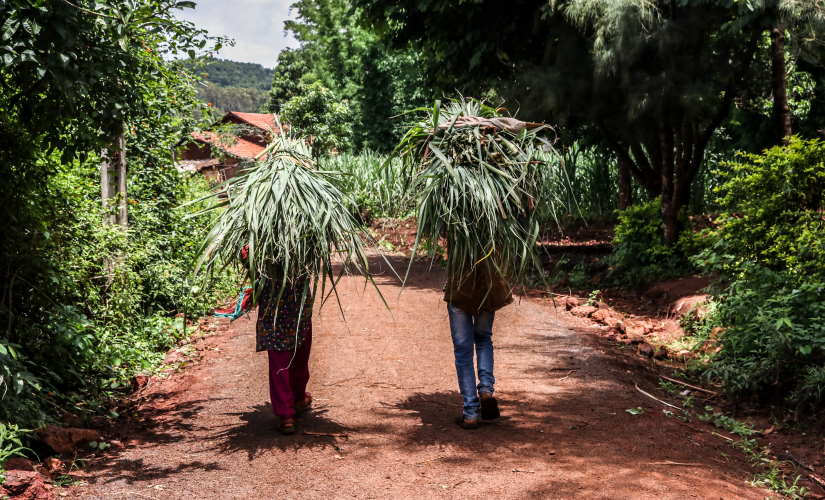 A lack of access to the internet has invited several risks for Suraj. Every day he goes to his friend, Mayuri’s house to borrow her single notebook. She jots down the things she understands from the e-learning material, and it becomes a reference or go-to point for at least five of her classmates in the hamlet.

When I ask Suraj, if he understands the concepts from the notes, he answers honestly, “I just copy it down and learn.” Suraj isn’t responsible for this. The system has failed him.

His father, Vijay, 45, travels the remote villages of the Konkan region in Maharashtra for nine months a year to cut bamboo and rests for the remaining three months. With the lockdown, he is stranded in his home. Suraj’s mother, Shalan, 40, works as an agricultural labourer in the nearby villages.

When I was talking to him on call, they had received a PDF file with the names of elements (periodic table). Suraj didn’t understand a word of it but had no other resort rather than just mugging it up.

Students are even asked to take online tests related to their subjects. A lot of students like Suraj are deprived of it. While Vikram managed to give his board exams, now he fears, if he will be able to continue with the education. For him, the most pressing thing is finding a job immediately.

In the second week of April, the headmaster of Vidya Mandir Dhakale, KB Patil, started surveying the households and made a handwritten contact list of parents with their WhatsApp number. Of the 31 students enrolled in grade V, VI, and VII, about 16 had WhatsApp. The school has a strength of 66 from grade I to VII. File Photo of a group of students returning from school

He says, “The ones who are interested will even go to other’s houses to see the videos, and the ones who want to do nothing will be home. The output of such initiatives is only 50 percent, but we try for 100 percent. The students have to see the videos and solve the questions in their notebooks and send it to us so that we can assess them.” The success of such steps “depends on how much the students want to learn and how much do their family members support,” he adds. He plans to send the soft copies of local newspapers also.

However, times have become much more difficult for Sangeeta Sonawane, 35, an agricultural labourer from the same community.

“Divas dhaklat jayecha (We keep passing the days),” she says. The Sonawane family with five members got 25 kilograms of rice from the State Government in the second week of April. Sangeeta has bought other required grains, dals, and groceries from a shop in her hamlet and has a credit of Rs 500. “We don’t have any money left to buy a notebook,” she says.

Her son, Sanket, who is in grade V, goes to his friend, Pranav’s house, wearing a handkerchief wrapped as a mask – to not miss out on the e-learning material. “My son understands that we are going through a tough time, and that’s why he doesn’t even ask us to buy a notebook.” He is taking the notes of seven subjects in a single 180-page notebook and will exhaust it soon. “Another day, he told me that once we get some money, we’ll buy the book.”

Sanket jots down what he understands. However, how much of the content he can comprehend remains a big question mark. “Sometimes he asks me doubts,” says Sangeeta, who dropped out of grade X.

One of the 108 households in the Dhakale hamlet

Mobile recharge is something not in the vicinity of the Sonawane family. “We’ve to go to Vadgaon (5 km) for getting a recharge done (Roughly Rs 500 for three months),” she says. Vadgaon, however, has been facing a brutal lockdown after a Corona positive patient was found on 27 March. “We don’t even have the balance to make a phone call,” she rues.

Her husband, Vinayak, 35, is a mason and goes to the nearby villages as and when he gets the work. From 22 March, both haven’t been able to go out for work. While the restrictions on farming have been lifted, Sangeeta says that the police and village authorities don’t allow them to go out.

The education department has planned to air the content on radio and television for students who don’t have access to a smartphone. Director of Maharashtra State Council for Educational Research and Training, Dinkar Patil, said in an interview to Hindustan Times, “MHRD’s Swayam channel will host this content for two hours in the morning and evening every day. We are working on the content and it should begin in a couple of days.”

There are 66,033 Zila Parishad schools in Maharashtra. As per the State Education Department, there are roughly 2.25 crore students enrolled in schools (both private and government) in Maharashtra. As per the Economic Survey of Maharashtra 2019-2020, the dropout rate in primary schooling is 1.09 percent which increases to 2.15 percent for upper primary and reaches a stark 8.8 percent for secondary schooling in the state for 2018-2019.

A crisis like this can fuel drop-out rates quickly and has even forced several students in Dhakale to consider picking up odd jobs to support their families. Ravindra Sonawane, who awaits his previous month’s salary, is scared of his daughter dropping out. Around 20 March, he had to return to his hamlet from Kasegaon village (Walwa taluka in Maharashtra’s Sangli district) where he works at a dhaba. Upon asking for the due salary, the owner just said, “Baghuya (Let’s see),” he tells me on call.

However, Ravindra can’t say ‘let’s see’ to ration. His elder daughter Mayuri, who’s in grade VIII, goes to a guardian’s house in the community who has internet. With public service announcements on Covid-19, Mayuri is now scared of stepping out. A few days back, she asked her father, “Why can’t we see the videos on our phone?” Ravindra wasn’t prepared to answer this.

“It’s important to educate the children, but I need money for recharge,” he says. His hope from education stems from his past. “I couldn’t go to school, so I want my children to get educated.”

Mayuri takes the help of Vishal Sonawane (the local guardian) to understand the concepts. “We don’t have any resources like glue, motor, battery, etc for science experiments,” she says. This adds more to the misery. Frustrated, Ravindra describes the plight in four words, “Kaam nahi, ration nahi (There’s no work, no ration).”

All images courtesy of the author.