The COVID-19 pandemic has proved to be a double whammy for the already-struggling folk musicians, who say it has wreaked havoc on their livelihood by forcing them to sit idle in their homes and the future looks gloomy too.

The world has come to a standstill with no immediate signs of resumption of any kind of entertainment programmes. In these times of quarantine and social distancing, all festivals, functions or fetes have been cancelled, they say. 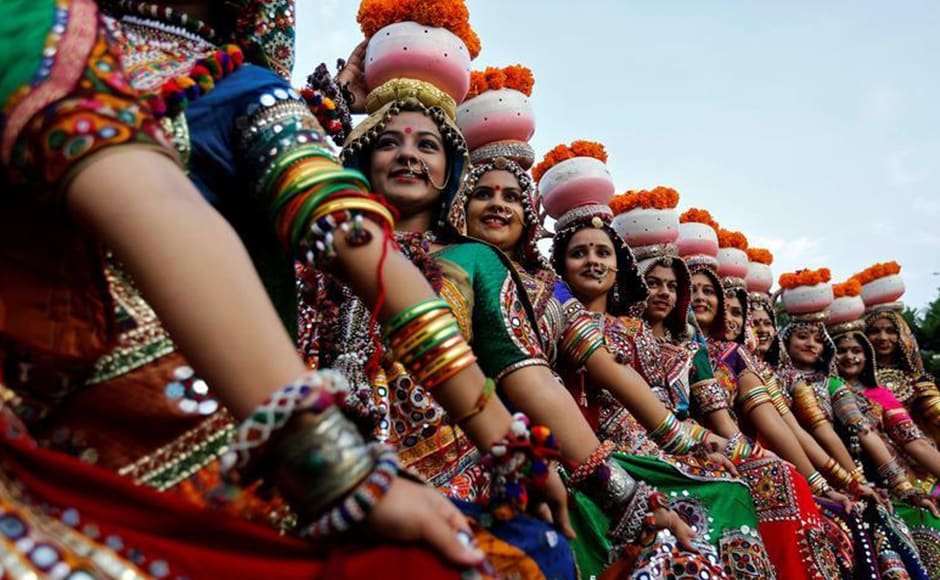 Women dressed in traditional attire pose after taking part in rehearsals for Garba, a folk dance, ahead of Navratri, a festival when devotees worship the Hindu goddess Durga, in Ahmedabad, India, September 25, 2016. REUTERS

Folk musicians say they have been left with no work and majority of them are not tech savvy to use the social media to reach out to an audience or even raise their voice.

Renowned folk singer from Jharkhand Madhu Mansuri Hasmukh, who wrote and sung several Nagpuri songs during the separate state movement, is getting phone calls from needy artistes but is clueless about how to get help for them.

“The folk fraternity from Jharkhand has given me lot of love and respect. They are continuously sharing their problems with me in these trying times. They do not have any money or essentials at home. Whom do I approach to highlight their plight? I am ready to write or speak to,” said Mansuri, who was awarded the Padma Shri this year in the field of art.

He has 20 -22 folk artistes including five instrumentalists in his troupe and most of them are landless and depend on their art for livelihood.

“They depend on monthly programmes. Some of them also work in fields but this year, kharif crop has been affected due to lack of irrigation,” he added and rued that electronically-generated rhythms are already overtaking folk traditions and the coronavirus pandemic has only added to their problems.

“The government must take note of their plight. I have been repeatedly demanding pension for them. These artistes are innocent tribals, mostly uneducated,” said Mansuri.

Another Padma Shri folk singer Prahlad Singh Tipaniya, who performs Kabir bhajans in the Malwi folk style from Madhya Pradesh, said he has been hearing about some online concerts these days but adds not every artiste is tech savvy.

“The current situation and immediate future look gloomy but what can be done? We live in a small village and are not well versed with technology. I have heard about online live concerts and all and people are requesting me to participate,” said the well-travelled singer.

His concerts in Fiji and Mauritius have been cancelled. He said most members of his troupe are part time farmers, so the problem is not that severe for them but it is scary for those who depend only on their art for a living.

“The government should think about them. Where will they go for help,” he asked.

Dhangari Gaja dancers, who perform the vibrant traditional folk dance of Maharashtra, look forward to this season every year.

“It is generally a peak season for us as this is the time of marriages, fetes, festivals throughout the state. Then from June to Diwali is off season when we take up part time farming,” said Anil Kolekar, the founder of Dhangari Gaja Artistes group in Sangli, Maharashtra, who has performed in many international events including in Russia (2009), London (2002) and Delhi Commonwealth Games (2010).

The main theme of this dance is celebration, happiness, joy of coming home to loved ones and honouring the God and seeking his blessings.

And this mood is emphasised by swaying to the pulsating sound of the drums and the reciting of poems exhibiting boundless enthusiasm. This exquisite form of dance belongs to the shepherds, cowherds, buffalo keepers and men who undertake husbandry are referred to as Dhangars in the local dialect.

There are around 50 folk artistes in Kolekar’s group who earn around Rs 5,000 to Rs 20,000 in these two months in normal conditions. Now they are depending on ration provided in fair-price shops but not all have the necessary cards.

“We did not get any support from the culture department. Other artistes who perform Lavani, Tamasha, Bharud dance are also calling for help. They think that since I am an international artiste, I can raise their voice,” said Kolekar.

“We have many aged artistes in our troupe who can only sit and play instruments. They are unable to do any other work. All of them are poor and illiterate. Forget about raising a voice on social media, most of them do not even have a phone,” he said.