www.smartphonephotography.in See the World through your Smartphone
Home SMARTPHONE Crustaceans Which Live On Mobile Homes A Treat To Watch On Odisha Coast 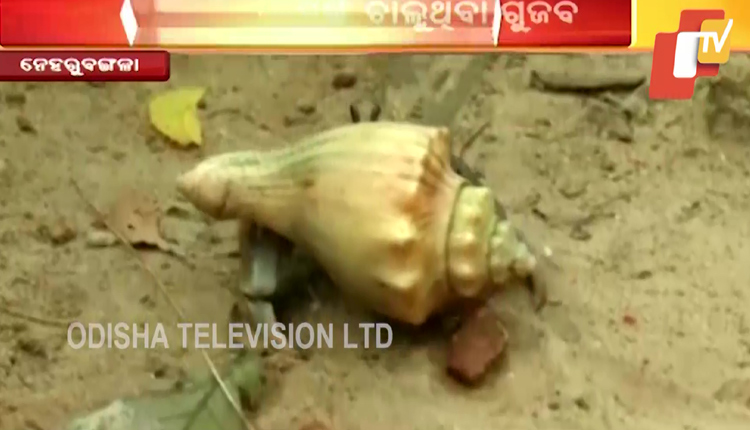 Paradip: A religious shrine, at Nehru Bungalow not so far from the port town of Paradip is abuzz these days with the movement of conch shells which come out of their dugout to feast on the ‘bhog’ the devotees offer every day.

Superstitions apart, the conch shells that tend to move creating an illusion of some kind of supernatural phenomenon, are actually housed by hermit crabs, who take shelter in the dead shells of conch, snails, and sea-shells.

And being a coastal area, Paradip is a perfect natural habitat for these creature, that is one of the 800 varieties of crabs found all over the globe.

Usually, the entire body of a crab is covered with calcified armour but in case of hermit crabs, they lack protection on the hindmost part of their body. It is due to this reason, these creatures salvage empty seashells to take shelter and protect their bodies from enemies.

Speaking to OTV, Sadanand Mohapatra, Joint Director of Fisheries Department said, “Hermit crab is a free-living thing and parasite that usually feeds on other creature. The phenomenon of these creatures housing inside conchs is quite natural phenomenon and has nothing to do with any supernatural activities.”

A priest at a nearby Goddess temple, Kailash Baba however believes that the presence of the creatures is associated with the nearby Goddess shrine which is inhabited by supernatural phenomenon.”

Sobha Pradhan, a devotee says “We come here to watch moving conchs. This is a matter of belief if there is any superstition related to this place but these creatures are a treat for eyes