Post-Delhi riots, a new evil — rumour-mongering — gripped several parts of the National Capital on Sunday. The spillover of the panic could be visible even on Monday on the streets and in the markets.

Minati Saha, a 45-year old resident of Tughlakabad in South Delhi was returning with her husband from Noida after meeting her relatives on Sunday evening. As she got down at Nehru Enclave Metro station, she received a call from her neighbour that a riot-like situation had taken place in her area. 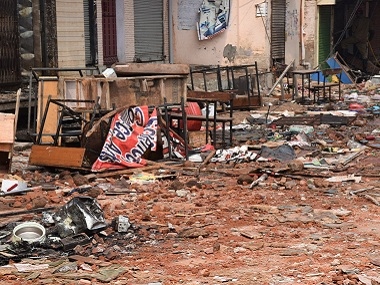 A heap of ruins in a riot-affected locality in New Delhi. Image courtesy Ismat Ara

“We were told that due to some firing incident, a riot had taken place and we should stay away from coming home. No autorickshaw or e-rickshaw was ready to take us. We walked and after reaching CR Park we found the market closed at 9 pm, which was surprising. There was panic on the street and passersby told us that something wrong had happened, but no one was clear about the incident. So, we decided to spend the night at our relative’s place next to CR Park,” she told Firstpost.

Saha was not alone. There were a large number of citizens who faced a similar experience in several parts of the city, which arose due to the spreading of rumours leading to panic. The three-day rioting in North East Delhi that witnessed a gruesome killing of 48 people, rampage and burning of properties on a mass-scale, and violence on streets of the National Capital was enough to create a fear psychosis for any common man on the street.

The weekend evenings, especially Sundays at Chittaranjan Park (CR Park) Market and at adjoining Kalkaji, are vibrant and abuzz with socialising and business transactions and the eateries for which people from across Delhi, Noida and Gurugram visit these places, keep serving customers till 11.30 pm.

But this Sunday, it was different and very unusual, as shutters were down by 9.30 pm and roads wore a deserted look. Only people in groups could be seen standing by roadside and market premises pondering on the gravity of the situation. It all started at CR Park — a hub of the Bengali community in Delhi — after rumours started emanating from nearby Govindpuri about some ‘firing incident’.

It’s the same location where during the 2019 Lok Sabha polls and Delhi Assembly Election in February, top leaders from BJP, Aam Aadmi Party (AAP) and Congress held rallies as part of campaigning in South Delhi.

The panic situation quelled only after armed Delhi Police personnel in large numbers visited CR Park and Kalkaji and assured the residents that “unsubstantiated reports of communal violence were being circulated leadings to rumours”.

“On Sunday evening, rumours started spreading like wildfire and caused panic in the area. In fear of rampage, shopkeepers shut their shops. We’re constantly appealing traders and residents not to fall in the trap of rumour-mongering. Personally, I have spoken with our MLA of Greater Kailash constituency to take necessary action,” Anup Tagore, former secretary, CR Park Market Association told Firstpost.

“Both Hindus and Muslims have shops in CR Park markets and we have been peacefully doing business here for years with harmony. Besides Bengalis, Punjabis, Banias and Muslims, there’re shopkeepers from North East India as well. The communal divide has never been an issue here. It’s the criminal elements who are spreading rumours and law should strictly deal with this. We’ve appealed to Delhi Police as well,” said Salim, who owns two shops in CR Park.

After the imposition of Section 144 of CrPC at Shaheen Bagh area on Sunday, the situation became tense in the neighbourhood localities like CR Park, Kalkaji, Govindpuri, Tughlaqabad and Madanpur Khadar, including Shaheen Bagh.

Similar to South Delhi, the residents of Khyala in West Delhi on Sunday too came under fear after a police team raided a local betting racket. The residents mistook the suspects, who were fleeing the spot due to police action, as rioters.

“The police raid fuelled panic among the residents and shopkeepers, especially when the suspects involved in betting started running. We had to close down our shops to face any possible rampage, but later we came to know that it was just another rumour. After this riot, the situation has worsened in every part of Delhi. While politicians are trying to communalise the situation, it’s the common man bearing the brunt,” a shopkeeper said on condition of anonymity.

The spread of rumours through Facebook and WhatsApp wasn’t limited to residential areas or markets, but also hit inter-state highways on Sunday, which was quite unusual.

Ajeet Singh, who was going from Ghaziabad to Surajkund in Faridabad by car with his family to attend a wedding reception on Sunday, faced a similar incident.

“When I was on the elevated road that leads to Faridabad, I found a huge traffic jam. As I wanted to enquire, I found a couple of persons rushing towards us asking us to go back as riot had broken up ahead,” Singh told Firstpost.

“I was stuck in between and it wasn’t possible to turn back. I wondered, unlike colonies, how could riot take place on a highway? Later, it turned out to be a rumour and jam got cleared. I reached my destination and came back home without any untoward incident,” he said.

For many in Delhi, who had witnessed the anti-Sikh riots in 1984 and thereafter, rumour-mongering reminded them of those gory incidents that had created havoc in the city.

Trilokpuri in East Delhi was one such area that had witnessed large-scale violence in 1984 after the assassination of the then prime minister Indira Gandhi. Old-timers recall that besides the direct attack on the Sikhs, the rumours had exacerbated the violence to an unfathomable level.

“In those riot-hit days of 1984, each day and night used to be that of horror. We didn’t know whether we would live to see the next morning! Now when I hear about any rumour of riot or any untoward incident of violence as it happened in NE Delhi, it brings back my memories of horrific incidents of rampage, merciless killings and burning of houses by mobs – all these happened in front of me. A rumour causes more damage, as it leads to actual rioting without any logical reason or provocation. It fuels anger and hatred among people as it happened in 1984,” recalled 68-year old Joginder Singh of Trilokpuri.

As Delhi is on the edge, many poor residents living in resettlement colonies want to leave the city due to the fear of a riot. Rumours have escalated the fear.

“I don’t know how far these rumours are true, but undoubtedly there’s tremendous fear among the residents of this area. It created so much panic on Sunday that we rushed home after shutting down our shops. Here Hindus and Muslims have been living together for years, but now many among us from both communities want to leave this place and go back to their native places, whether in West Bengal or Bihar, due to fear of a riot. No one wants to witness another Jaffrabad here,” said Swapan Das, a smalltime vendor and resident of one of the resettlement colonies at Tughlakabad Extension, which is just 2-kilometre from upscale Greater Kailash in posh south Delhi.

The extent of the rumours can be gauged from the sheer number of calls Delhi Police received on Sunday. It got 1,880 SOS calls with 481 calls in West Delhi, 413 calls in South East Delhi, 310 calls in Dwarka, 222 calls in Outer Delhi, 168 calls in Rohini and 127 calls in South Delhi Delhi government on Monday formed a nine-member committee – ‘Committee on Peace and Harmony’ — chaired by Greater Kailash MLA Saurabh Bharadwaj to put an end to spreading of rumours and unsubstantiated reports both verbally and through social media platforms.

Following are the key decisions taken by the committee to quell any rumour and preserve peace and tranquillity in the National Capital:

“I’ve visited several localities in Delhi, including my own constituency and found these rumours baseless and false. These were spread on Sunday by mischievous elements. We’re working towards preventing such rumourmongering and appeal citizens to cross-check every message before reacting on it,” Bharadwaj told Firstpost.

The AAP MLA also shared a mobile phone number with the residents to alert him, if one comes to know about any rumour.