But what’s there is amazing

Genshin Impact spent most of its time leading up to release as that game people couldn’t talk about without mentioning The Legend of Zelda: Breath of the Wild. Now that it’s out, the similarities and differences between the two titles have become clearer. Genshin Impact has a similar scope to Breath of the Wild, a similar if-you-can-see-it-you-can-climb-it open-world, gliding mechanics, recipes, stamina meter, and fast-travel towers, to name a few. However, it’s the differences between the two titles that really illustrate how Genshin Impact is not just a Legend of Zelda clone.

Spend a few hours with Genshin and you’ll understand how the two titles differ. That feeling of freedom that permeates throughout Breath of the Wild just isn’t here, as Genshin Impact follows a more traditional, story-driven path forward. It has multiple characters you can switch between on the fly, each playing a bit different than the next. And, of course, the biggest difference between the two is Genshin Impact is free-to-play and available on mobile, which is how I’ve personally been enjoying the world of Teyvat.

And what a beautiful world it is. On my Google Pixel 3a, the world of Genshin Impact absolutely pops. That should be no surprise as the game was developed by the same people who made Honkai Impact 3rd, another gorgeous mobile game. But this goes beyond what miHoYo was able to do in that title. Cresting the first hill and seeing the world spread out before you is a truly magical sight on my phone and a great showcase of how quickly we’ve come from the early days of iPhone gaming to where we are today.

Unfortunately, my Pixel 3a is a budget phone and Genshin Impact is pretty demanding. I probably get a good three hours of play in it before I have to recharge my phone. There are multiple graphics settings, but if I play on anything higher than low, the framerate becomes a slideshow and my phone starts to overheat. On those low settings though, the game still looks incredible even if I still have to deal with the occasional framerate drop and pop-in.

As it is a live-service game with gacha elements, the UI is busy, though not intrusive. Where this mobile version could use work, however, is in the controls. First of all, Genshin Impact does not support any controllers at the moment, which seems silly seeing as this game is on PlayStation 4. Second, it uses a fixed-place control pad rather than one that moves with your thumb. The latter option offers far superior control than what miHoYo has here, and its position means my thumb is regularly blocking a little bit too much of the screen. The buttons for your attack, special, run, and jump are also a bit too close together and small, resulting in many instances where’d I’d jump off a cliff and fail to bring my glider out.

While I imagine most of our readers will play Genshin Impact on PS4 or the still-not-dated Switch port, this might be a mobile-only game for much of its worldwide audience. It is, arguably, the most impressive mobile title since Epic blessed us with those Infinity Blade games way back when. That’s why nailing these touchscreen controls should be a priority for miHoYo. It’s playable the way it is, but with a few adjustments, it could become one of the best controlled 3D mobile games on the market. 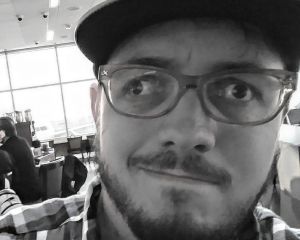 Just what the internet needs: yet another white guy writing about video games. more + disclosures