www.smartphonephotography.in See the World through your Smartphone
Home SMARTPHONE How Carson Wentz went from Eagles savior to benched QB

The fractured relationship between the Philadelphia Eagles and Carson Wentz took another blow on Tuesday with the announcement that rookie Jalen Hurts, not Wentz would be the team’s starter. It was a predictable move after days of non-answers about the team’s quarterback situation, which normally predicates a switch. However, that doesn’t mean it was an easy decision. Apart from hurt feelings and bruised egos, the Eagles now have to manage the worst contract in the NFL, potentially leading to Philadelphia to trading Wentz for peanuts, just to try and keep their finances in order. It’s a remarkable turn to an era that brought so much promise, but how did we get here?

Philadelphia had a brutal decision to make after winning the Super Bowl in 2018. The team had two excellent quarterbacks on the roster, with Wentz being on fire all season long and leading the Eagles to the playoffs, only for Nick Foles to take over due to injury and get all the glory of winning the big one. This left the team with a conundrum: Stay with the player who got them there, or go with the guy who proved he could beat the best teams in the NFL? Youth prevailed, and the Eagles decided to stay with the 25-year-old Wentz, trading Foles to the Jaguars.

In the end it was the right choice. Foles has never managed to recapture the brilliance of his Super Bowl run, but that doesn’t necessarily mean sticking with Wentz was the correct choice either — and that’s where this gets complicated.

Soaring quarterback contracts have been a concern for every team in the NFL. Knowing that waiting to sign a deal will only end up costing more, teams have instead elected to get deals done early — especially in cases where they believe in the player.

As a vote of confidence, the Eagles extended Wentz early. In June of 2019 he signed a 4 year, $128 million extension that would keep him with the team until 2024. However, that deal won’t even begin until after this season. Right now he’s still playing out the rookie contract he signed in 2016. This means that, assuming Hurts does enough to remain the starter, the Eagles will be paying their backup quarterback over $34M next season.

Obviously this is untenable. If Hurts proves he can carry the load then Wentz’s deal essentially eats up any, and all possible cap room to get the team some much-needed weapons. If Philadelphia were to cut Wentz outright he would cost $77M against the salary cap next season in dead cap space. With a projected NFL cap of $176M it’s not clear if Philadelphia could even field a team for that cost. Meaning, they’re not going to cut him.

Sure, the Eagles could live cheap and keep Wentz on the roster — but this would be a death knell to their chances for 2021 and beyond. This means that the most likely scenario would be trading Wentz, losing a few players in the process as cap casualties, but at least getting something back in return and fixing the team’s finances.

The issue is that every team in the NFL knows the Eagles need to move Wentz. That isn’t a scenario conducive to getting a good return. It also means we could see Wentz traded for as little as a third, or even fourth round pick — which could potentially be a steal for a quarterback-needy team.

Why was Carson Wentz so bad this year?

On the surface this is the biggest conundrum of the 2020 season. Here we had one of the best young quarterbacks in the NFL, seemingly forget how to play football overnight, and seeing his statistics and effectiveness plunge as a result.

Let’s go back to what happened after Wentz signed that big extension. Initially it looked like the Eagles were the geniuses of the NFL. Wentz surged back into prominence in 2019, throwing for over 4,000 yards and playing relatively mistake-free football. He once again showed all the trappings of an elite quarterback, and was signed to a long-term deal that was potentially a steal, considering how quarterback contracts were rising.

However, despite Wentz’s success, the Eagles had significant structural problems on offense. They didn’t have good wide receivers, or a reliable every-down running back — but Wentz was good enough to mask these problems, so long as he had Zach Ertz at his side. We’ve seen this scenario before: Teams without good receivers can make it work, so long as they have an elite tight end. This carried Cam Newton with the Panthers for years, because he had Greg Olsen to rely on, the same goes for much of Philip Rivers’ tenure in San Diego with Antonio Gates at his side, even Tom Brady leaned on this format to a degree with Rob Gronkowski.

The elite tight end format works, but only for so long — and it puts a lot of faith in that guy staying healthy. Here lies the major problem for the Eagles. Not only did Ertz get injured in 2020, taking away Wentz’s only real receiving threat, but the quarterback watched as more of his weapons went away. Nelson Ahgolor left in free agency, taking away a deep threat. Alshon Jeffery has struggled with injuries for much of the year. This left Wentz with Travis Fulgham, who has been better than anyone thought, but still flawed, backup tight end Dallas Goedart — and that’s about it.

To compound issues the offensive line has been a mess of injuries and age. Jason Peters, one of the league’s best offensive tackles for damn near 20 years, was moved to guard in an effort to ameliorate the fact he’s lost a step with age — and starting left tackle Jordan Mailata is still very much a work in progress. Mailata is making the ludicrous leap from Australian rugby league to the NFL, and while he’s been very good, there are still signs the project isn’t near completion.

The Eagles have allowed a league-worst 53 sacks in 2020. When you combine an inability to stop pressure with a lack of elite receivers it’s a recipe that no quarterback could overcome, no matter how talented.

There are behind the scenes problems too.

Wentz has often been described privately as being extremely Type-A. It’s a trait you want to see in leadership positions on NFL teams, but sometimes that assertiveness can be a detriment. The trope of the “quarterback who thinks he knows more than the coach” isn’t new. Heck, this season alone we’ve seen friction in Tampa Bay between Tom Brady and Bruce Arians, but Wentz is a long, long way from carrying the same weight as Brady does.

It’s clear now that Wentz has been butting heads with coach Doug Pederson for much of the last two seasons. Pederson is trying to keep things together and field a team that can win, Wentz is trying to lead the team to victory — but their visions of how this is achieved seemingly no longer mesh.

The Eagles need a full offensive rebuild to get back to prominence, and benching Wentz is as much a sign that the team needs someone they feel can buy in and be coachable, as much as they might need a talented arm.

The relationship between the Eagles and Wentz isn’t bad, it’s completely broken. As a result Wentz is not a bad player, he’s a broken one. The good thing about broken players is that they can be fixed, if there are the right tools.

Who could trade for Carson Wentz?

There are numerous quarterback-needy teams who weren’t bad enough in 2020 to land the top pick and select Trevor Lawrence. Teams potentially wanting Wentz would need a quarterback, and have the salary cap room to absorb his contract. This drastically reduces the number of landing sports.

On paper this makes the most sense, but honestly, I don’t see it. The Jaguars got burned already by trading for Nick Foles, making trading for Wentz a hard sell for fans. While Jacksonville has the most salary cap space in the league, they might want to try and use that more effectively than adding a quarterback. In addition, Gardner Minshew has been playing extremely well when healthy.

The Colts are showing they’re still a really, really good team — and have a good chance at making the playoffs. However, Philip Rivers isn’t going to be able to last forever, and Indianapolis should know it.

Trading for Wentz might seem ridiculous, and it kind of is, especially when the team doesn’t need a quarterback right now, but it might be the kind of move that solidifies the organization for the years to come.

This is the scenario so obvious you could see it from a mile away. New England need a long term quarterback, and signing Wentz and turning him into “a Patriot guy” is so obvious it hurts. Typically you’d see a Type-A guy like Wentz and assume he’s the antithesis of what New England would look for, instead opting for guys who buy into their system — but in signing Cam Newton the Patriots showed they’re more open to taking risks than in the past.

Wentz wouldn’t inherit great weapons in New England, but Bill Belichick could be just what the doctor ordered to turn his career around. That said, I still think this is an outside possibility — only because it’s not like the Patriots to take big risks when it comes to money, and trading for Wentz would be taking on a lot of salary obligations.

The Eagles would be loathed to trade Wentz to a division rival, but Washington makes all the sense in the world. WFT firstly have the cap room to absorb the contract, and coach Ron Rivera has shown a past willingness to cede offensive control to people who know more about it than he does.

Wentz would be the big personality the team needs on offense. Offensive coordinator Scott Turner worked with Cam Newton in Carolina, and knows how to deal with big personalities. With WFT losing faith in Dwayne Haskins this could be the exact move the team needs, especially considering how good their defense is. 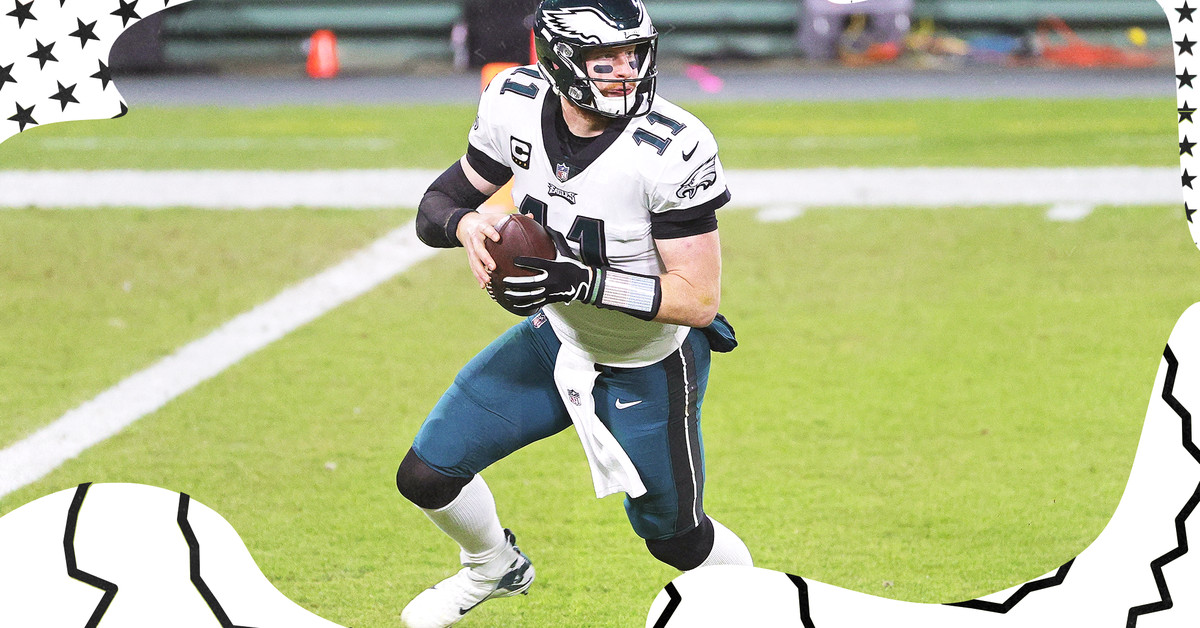