www.smartphonephotography.in See the World through your Smartphone
Home SMARTPHONE How Indian TV anchors made the Capitol riots all about Modi

Extraordinary scenes played out in Washington DC yesterday as Trump supporters stormed the Capitol, where US lawmakers were counting electoral ballots to certify Joe Biden’s presidency. Walls were scaled, windows were smashed, media equipment was seized and broken, and four people died.

President Donald Trump was blamed for inciting the violence, which followed a speech where he urged his supporters to “stop the steal” and “go to the Capitol”. Several of his aides resigned, Democrats moved to impeach him, and Biden called the rioters “domestic terrorists”.

Indian prime minister Narendra Modi joined the chorus of global voices condemning what had happened, saying the democratic process “cannot be allowed to be subverted through unlawful protests”.

Distressed to see news about rioting and violence in Washington DC. Orderly and peaceful transfer of power must continue. The democratic process cannot be allowed to be subverted through unlawful protests.

If you’re wondering what these handles might have in common, it’s what a section of the TV news media likes to call the sinister “Lutyens media”. On primetime debates last night, this was clubbed with “the Opposition” in general to illustrate that Modi’s statement was “trivialised” to form an “anti-Modi” narrative.

Here’s a quick rundown of how news channels covered the Capitol riots, or what they covered instead.

“Focus on India, not America,” the Opposition had apparently shouted, while Shivshankar himself focused on cleansing Modi’s image. “If it was not about the BJP, then I will tell you what the Opposition would have said today,” he said. “They would have said, ‘Let’s all work together. We have got the example of America before us. Here we are, prime minister, with you, walking hand in hand.’ That hasn’t happened.”

Considering it’s Times Now, Shivshankar didn’t miss a beat in using the Capitol riots to slander Shaheen Bagh. “Can the Opposition call itself a defender of democracy when it backs those who take liberty, freedom, hostage, like when the Supreme Court pointed out by declaring the agitation against Shaheen Bagh illegal?”

On The Newshour, anchor Navika Kumar also discussed the riots but kept her focus on the Opposition vs Modi. The minute the prime minister says anything, Kumar said, he’s asked why he said this and not that.

“Damned if you do, damned if you don’t,” she said. “Chitt bhi meri patt bhi meri, especially for the Congress who doesn’t know what’s going on in their own party. They want to dictate to the PM and drag him into this? Why?”

Then we move to Sudhir Chaudhary, the man who once plagiarised a “jihad flowchart”, slandered Jamia students when they were teargassed by the Delhi police, and whose primetime segment was replete with anti-Muslim dogwhistling during the Tablighi Jamaat event last year.

“Have you ever seen such mayhem unfolding in our own country?” asked Chaudhary. “We also conduct elections and many times, the party making the government does not get the majority. But never in our history has the mob ever dared to storm the Parliament.”

He’s got us there.

Chaudhary continued: “India is the world’s strongest democracy, and not America. After this, America would not dare to lecture us on democracy…The time has changed.”

On The Debate, Arnab Goswami devoted 52 minutes to discussing how – or not – the US riots are “linked to PM Modi”.

Even as the chaos unfolded 2,000 km away, Goswami said, those in Lutyens Delhi rolled up their sleeves and got to work.

“It is clear to me that the lovers of anarchy are having a meltdown from all their in-house tactics…to break and block India [having] failed,” he said. “And that is why they just have this one agenda to try and break this network, with none of their break-India tactics ticking.”

He added: “What do they eat for their breakfast? Because it seems to have an impact on their thinking and their minds.”

What else might one expect from the man who called the Hathras gangrape a “manohar kahani”? Or the channel that carried out an entire misinformation campaign about the identity of the Jamia shooter last year?

Rahul Kanwal on Newstrack discussed whether the US will be able to recover from the chaos unleashed by Trump and his supporters. He asked, “What does this rioting mean for America’s standing in the global community? Does this hasten America’s decline? Or speed up China’s rise?”

Kanwal also said one might expect to see these scenes in “Somalia, Iraq or Kabul” – but not in Washington DC.

Ravish Kumar used his customary brand of satire to draw parallels between the Capitol riots and violence that has been seen in India.

As the channel showed images of 2018 violence in Bulandshahr, where a policeman was killed, Kumar said: “Isn’t this mob made of the same elements that comprises the one in America? Things can move fast, many more to come.” He also compared it with the brutal attack on the JNU hostel last January.

“They are not just Trump supporters,” he said. “In the name of supporters, crowds like these have been readied in many countries, yahan bhi aur wahan bhi.”

Kumar also brought up the farmer protests, saying: “It’s good that for the past two months, the farmers are protesting silently. Today, India can set an example to the world that they are not like Trump’s supporters. Which is why India is proud of its farmers.”

Also Read : From indifference to victim-blaming: Why the mainstream media’s coverage of Hathras is unsurprising

Newslaundry Events: From The Media Rumble to NL Chats and webinars, updates and details on latest Newslaundry events

Complaining about the media is easy and often justified. But hey, it’s the model that’s flawed. 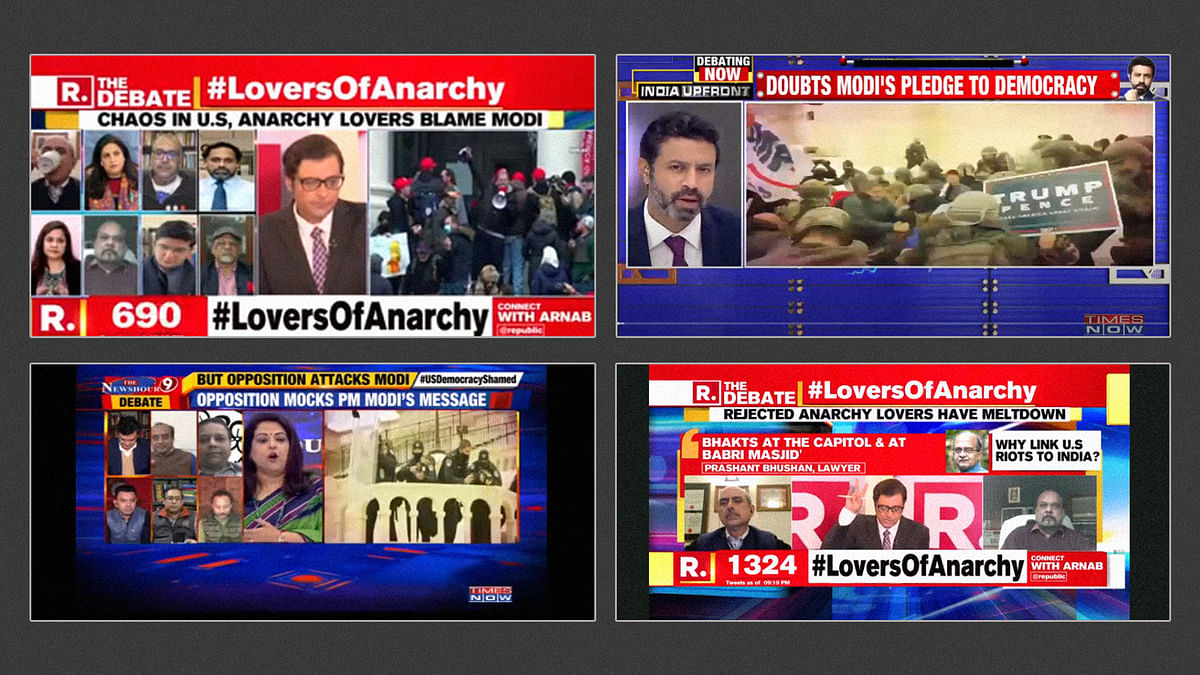