Dubai: SunRisers Hyderabad (SRH) on Thursday won the toss and chose to bat against Kings XI Punjab (KXIP) at the Dubai International Stadium. SRH scored 201 runs at a loss of 6 wickets against KXIP in the 22nd match of Indian Premier League (IPL) 2020 in Dubai.

David Warner and Jonny Bairtsow gave a terrific start to SRH. Stitching the fifth century stand between them, the Warner-Bairstow duo added 130 runs to the board in 12 overs. In due course, Bairstow scored a fifty off 27 balls. However, Warner departed at 52 runs which he scored in 40 balls. Later, Bairtsow ended up his innings at 97 runs in 55 balls. However, both the opening partners took the total score to 149.

SRH have made one changed too the playing XI; Khaleel Ahmed comes in for Siddharth Kaul. KXIP, on the other hand, made three big changes – Prabhsimran, Arshdeep and Mujeeb come in for Jordan, Brar and Sarfaraz.

Both sides are looking to bounce back from heavy defeats in their previous matches.

While SRH lost to Mumbai Indians by 34 runs, KXIP lost to Chennai Super Kings by 10 wickets in their previous games. 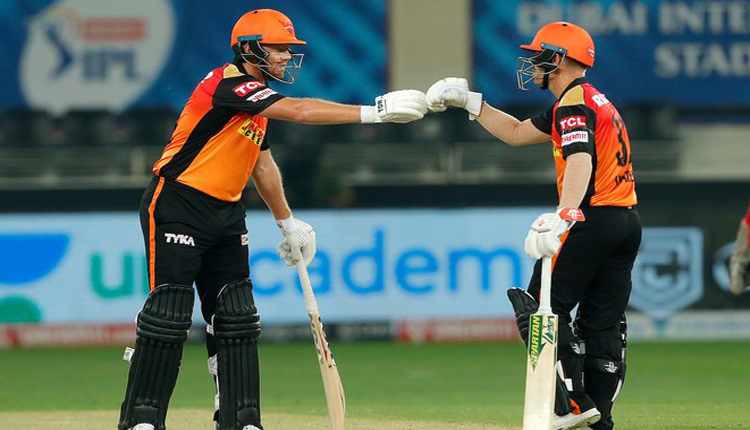