Two of the legendary singers of Indian cinema SP Balasubrahmanyam and KJ Yesudas had always been great friends, and maintained a great rapport even as fans debated over who was the best singer among them.

After SPB passed away on Friday, many celebrities expressed their emotions and posted condolences on social media, and now Yesudas has come out with an emotional statement mourning the loss of his dear brother. Yesudas’ statement reads “Among friends who worked with me, Balu was like my brother. I do not know how much Balu loved me, but he used to call me Anna. Though we weren’t born to the same mother, he treated me like a brother. Maybe we were brothers in a previous life. Even though Balu hadn’t learnt music, he had great musical knowledge. He would sing and also compose music. He sung like a trained classical singer in Sankarabaranam and anyone who listens to those songs would never say that he was an untrained voice. Both our families were friends as well. Balu used to say that the song Agaram Ippo Sikaram Aachu song in Sikaram which I sung was a gift to him, and it’s one of my most favourite songs. He’d never hurt anyone and waa always loving and affectionate. Once, when we were in Paris, we did not get food on a night. Balu knocked my door, mimicking room service, and had cooked meals for me and I ate heartily. The last instance of us singing together was in a concert in Singapore. I was waiting in the US hoping that Balu would recover, but COVID has inflicted a huge loss for us. I am not allowed to visit India right now due to the current circumstances and while I’m dejected that I am unable to see him one last time, I’m taking comfort in the fact that I wouldn’t have borne seeing a smiling Balu always seen, now lying still. I’ll cherish his memories”. 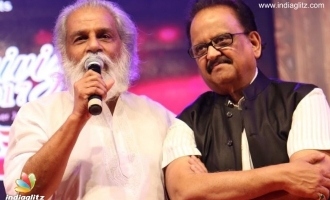 Rudram-1 test fired: How this tactical anti radiation missile will boost the IAF