Editor’s Note: The global coronavirus outbreak has brought all sporting action to an indefinite halt. While empty stadiums and non-existent sports news make for an unusually grim sight, we take it as an opportunity to look back, and – to paraphrase poet William Henry Davies – stand and stare.  In this latest series ‘My Favourite Match’, our writers recall the sporting encounters that affected their younger selves the most, and in many cases, helped them fall in love with the sport altogether. Happy Reading!

Looking back at the NatWest final, you tend to realise that so much happened that day for Indian cricket. India beating England by chasing 326 was a massive cricketing feat for a nation which did not have a great record in chasing totals and clinching victories in the finals of a tournament.

However, the win’s implications went beyond that. This was a beginning of an era in India’s ODI cricket which would be on the constant rise for years to come. Sourav Ganguly had led the charge of enforcing a change and had picked his players to effect that change. A team with a nice blend of youth and experience went about winning tournaments, making it to the final of the ODI World Cup, beating Pakistan in Pakistan and sharing a Champions Trophy among other feats.

But for a 11 year old who saw Ganguly wave his shirt at the Lord’s balcony, the win’s impact was limited to that particular moment. I was not thinking beyond it. I was not an analyser. I was a romantic.

India won the NatWest Series Final vs England at Lord’s in some style!

Ganguly may have regrets of having done that. But for me, it was not an impression of bad behaviour, rather it was an utter disregard for cricket stereotypes. His actions summed up India’s ethos. This was an announcement of a new spirit, a new era, a new dawn and passing away of the old school thoughts and cricket. And while I could not read these observations clearly, I could feel it inside. I could sense that this was something that I had never experienced. An India win, in England, against England, in a final, chasing a massive 326 despite Tendulkar’s failure, with two young men leading the charge. Oh man! what an incredible evening.

Even before the 2003 World Cup campaign, or the 2011 World Cup win or the 2007 T20 World Cup success, there was 2002. A sheer amount of happiness, pride and gratitude towards that generation of players is attached to that moment in history, for those who witnessed the live action.

In Ambala, where I used to live at that time with my family, the powercuts were a part of our daily lives. My two elder brothers and I had prayed for the electricity to stay in our house for this one day. India were in a great form and so were England. I wanted India to win but at the back of my mind, an India loss always seemed inevitable. I loved this team but did not trust them enough to win the finals.

This time around, something was special, only that it was invisible and the disbelief that we will eventually lose the match, had put a blanket on hopes.

The summers in north India are not the most awaited time of the year and on the top of it, it was July, the month schools reopen after summer break. Needless to say, July was not my favourite month. I was not a great fan of my school and hence, cricket was a huge relief. Those were the days when Indian cricket team did not play as much as they do today. Those were the days when I counted the number of days between two series. And while doing homework, saw myself sitting with cold drink and chips, watching a game of cricket. Indian players ecstatic after registering a win in the final. Image courtesy: Twitter/@ICC

To our bad luck, our prayers were not as effective as we thought they would be, and just before the toss, there was a powercut. It was a two-way disappointment as the cold drink – a luxurious item which was consumed rarely in those days – was beginning to lose its cool and we were losing ours as the toss was going to take place in a few minutes. And that wasn’t a time when we could log on to internet and check twitter to get the updates. The only communication device that was lying in my house was a dead landline phone which awaited the kindness of the apathetical government service. But even that, if alive, could not help much.

By the time the power came back, England batsmen were already up and running. Marcus Trescothick soon lost Nick Knight and was joined by Nasser Hussain. The England captain, despite being a good batsman, was not one of the greatest limited overs batter and all of us in our drawing room took him for granted. He would fall soon, we thought.

What followed for almost 32 overs, hurt us immensely. Boundaries, singles, doubles  – England’s second wicket stand went on and on and on. Hussain completed his maiden ODI ton. He had not scored any in the last 72 innings he had played and did not score any in the coming 15 innings of his career. He had chosen this day to almost ruin it for me, Trescothik too completed his hundred and we thought it was better had the electricity not come back. That first innings saw us switching off the TV many a times and then switching it back on just to see if wicket falls when we are not watching. Obviously, it did not work. We can laugh over it now but stupidity was part of our romanticism.

England posted 325/5. During the innings break, in our drawing room, three of us were lying on the floor, dreaded an embarrassing loss and arrival of our father from office, who did not appreciate us wasting our time watching a sport that ‘wasn’t going to earn us the bread’. We had decided that if there was a quick loss of wickets, especially if Sehwag goes, that was the end of our cricket watching for that day. However, Ganguly and Sehwag walked in and started bashing the bowlers all over the park. The apprehensions went away. There was no fear and looking at the mood in the drawing room, father also gave in and joined us.

That Ganguly came back from nowhere to stun England, and Sehwag kept on taking risks and they kept coming off made us believe that maybe it was India’s day today.

After India surpassed the 100 mark, I made a ‘grave mistake’ by saying this match was in our bag. And then a miserable series of events happened one after the other as Ganguly, Sehwag, Sachin Tendulkar, Dinesh Mongia and Rahul Dravid walked back to the pavilion. My brothers analysed the loss of wickets – batsmen should not have played those risky shots, Dravid should have taken his time. I was also among the reasons for India’s dismsal position at 146/5. I was told to not open my mouth until deemed necessary.

The Allahabad-born Mohammad Kaif joined Yuvraj Singh. Kaif is not related to us but my parents had a special bond with him, because, well, he was from Uttar Pradesh, which was also our home state. Personally, I was not a huge Kaif fan, as I had a dislike for his stance. But my older brothers had read about him and narrated his story to parents. 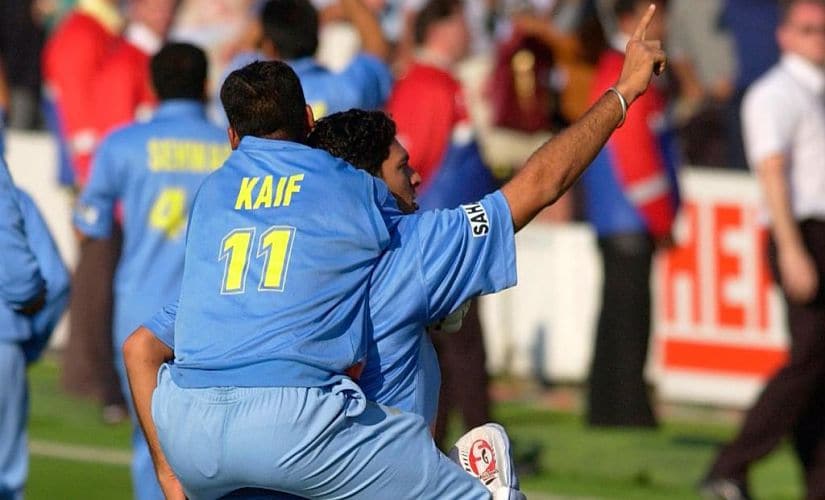 ‘Kaif is a gritty player and Yuvraj never gives up’, we were told by my elder brother. The remaining four of us felt he was over-ambitious at this stage of the match.

But as the partnership progressed, our interest started strolling back into the match. Kaif had begun to show his grit and Yuvraj refused to give up. Between the 22 yards, Indian’s next generation of cricketers were oozing with confidence, and there was a smell of something special being cooked. Singles were being run hard, doubles were being converted, an occasional boundary or a six was hit. Post 200, England looked disgruntled. I don’t think Kaif or Yuvraj played one fault shot till the Southpaw attempted to pull Paul Collingwood, losing his wicket. Another twist. Who wanted this? Nobody, at least in my living room.

Harbhajan Singh, the next man in, gave Kaif a good hand but a rush of blood ensured England pick one more wicket. And then the sight of Kumble getting dismissed put an end to our hopes and also an end to the match coverage for us as the electricity was gone again.

At 314/8, with 12 more runs to win. India would succumb, we had thought. There was no India win today, our hearts had accepted as we sat on our terrace, looking at the skies. There was no other way to check the score. My brother counted the balls so as to presume when the match will end. There were only 12 odd balls left.

And soon we saw a fireworks in the night sky. And heard a huge roar from our neighbourhood, and one more cracker burst in the street, then one more and the whole locality was buzzing with the noise of crackers.

The next minute, someone screamed out hard from two houses away from ours, “India jeet gaya“.

It was then that it hit us. India had won the NatWest final. The inevitable was cancelled. When the power came back, we saw the replays of Ganguly waving his shirt, Kaif and Yuvraj in each other’s arm, and the team surrounding them. We fell deeper in love with the sport. And nobody slept that night.

To read other pieces from our ‘My Favourite Match’ series, click here 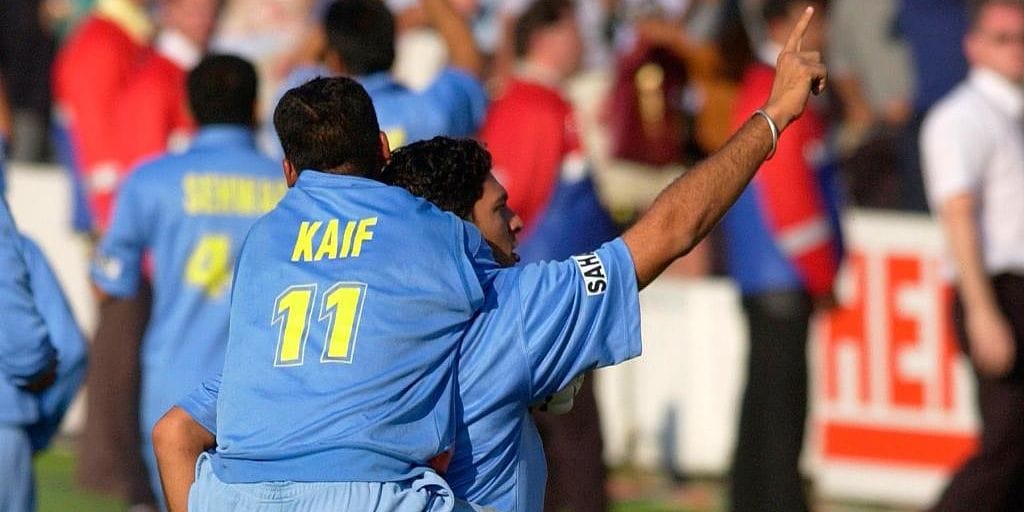