In 2019, Indiana Pacers star Myles Turner became one of the first people to bring the NBA to India by participating in the NBA India Games. But long before he came to India, his first taste of the country’s culture was through yoga, a discipline that has helped him to become a better athlete. 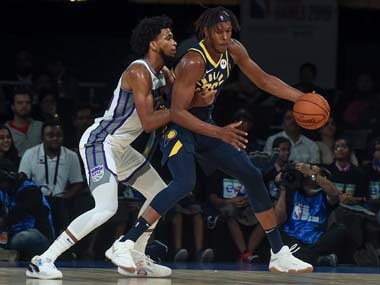 “I have been doing Yoga for about three or four years now. I started taking it seriously a few years ago. It helps with injury prevention and it helps me focus on my breathing and have muscle functionality,” said Turner. “You can lift all the weights you want, but you have to be able to have a lot of muscle functionality and yoga helps with that.”

Turner has not let the global pandemic stop him from undergoing his daily grind. In his spare time, he has also shown an interest in stock markets. “I’ve been learning about finances a lot lately, learning about the stock market. You have the app on your phone and see little stuff on the ticker. But I never knew what any of that stuff meant,” he said. “Just seeing how money is moving, seeing how the economy affects the market. I think it’s something you don’t learn in school.”

However, the COVID-19 outbreak hasn’t been easy to deal with as his father tested positive just a few days before his 24th birthday. “I’m not sure when he got it. They said they think he actually contracted it in Indiana. He caught it early before all the frenzy started to happen. There weren’t a whole bunch of people in the hospital so he could get rapid treatment, in and out,” Turner said.

Now at peace, since his father has recovered from Coronavirus, Turner is spending time with him in their house in Texas watching The Last Dance. “I think it’s something they’ve done a great job with, especially the two episodes a week. It’s something I watch with my dad every weekend,” said the 24-year old.

“It’s a good conversation piece, just for the league. It gives us a great mindset to keep us motivated and a source of entertainment. I’ve thoroughly enjoyed it, just taking a deeper dive into something that Google can’t really tell you,” added Turner.