Realme before the nationwide lockdown being implemented announced that it will be launching a new smartphone series centred around youth, called Narzo. The series includes two smartphones, the Narzo 10 and Narzo 10A. However, due to the lockdown, the company indefinitely postponed the launch event. Now, it has announced that the launch will take place on April 21.

The company seems to have made this decision after the government announced that it will allow the sale of mobile phones and other electronic products via online vendors like Flipkart and Amazon. This will allow the company to launch and sell its smartphones while the lockdown continues until May 3.

The new Realme Narzo series will launch on April 21 at 12:30 PM IST. The company will stream the launch event live on YouTube and its social media handles. It has said that the presentation was recorded before the lockdown was implemented by the government.

According to the leaks the Realme Narzo 10 will be a rebranded Realme 6i variant, which was launched in Myanmar recently.

The device will come with a 6.5-inch HD+ display with a resolution 1600×720 pixels. It will is powered by the MediaTek Helio G80 processor paired with a Mali G52 GPU. It will come with 3GB/4GB of RAM along with 64GB/128GB of internal storage. It will run Google’s Android 10 operating system with the company’s own Realme UI skin on top. All of this will be backed by a 5,000mAh battery with support for 18W fast charging.

It will sport a quad camera setup on the back consisting of a 48MP primary sensor paired with an 8MP ultra-wide angle lens, a black and white sensor, and a macro lens. On the front, it sports a 16MP sensor for taking selfies, located inside of the waterdrop style notch up front.

It will sport a 6.5-inch HD+ LCD display and will come with a MediaTek Helio G70 processor. The device will come with 2GB/3GB/4GB RAM along with 32GB/64GB of internal storage. Just like the Narzo 10 it will also run Google’s Android 10 operating system with the company’s own Realme UI skin on top. All of this will be backed by a 5,000mAh battery with support for fast charging.

In terms of optics, the device will feature a triple camera setup on the back consisting of a 12MP primary sensor paired with a 2MP depth sensor and a 2MP macro lens. On the front, it will sport a 5MP sensor for taking selfies. 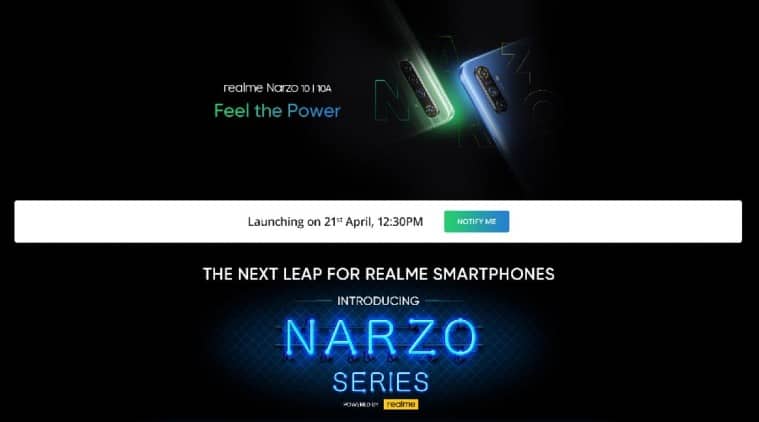 Infinix Hot 9 series with 5,000 mAh battery and punch hole display to debut in India on 29 May