“We have decided that collecting students’ mobile phones at the start of the school day and returning them at the end violates the freedom of action and communication guaranteed by the Constitution.”

The commission reviewed the matter after a high schooler filed a petition complaining about it. “We have recommended the principal of the school end the absolute ban on mobile phone use and to make revisions,” the commission added.

The school had told the commission that its actions were justified since they were based on the opinions of students, teachers and parents.

“In today’s society, mobile phones are important tools that enable people to form, maintain and develop social relationships,” the commission said. It added that schools need to “consider other measures that minimize violation of basic rights” by not confiscating phones without students’ consent and allowing them to use them during lunch and break times.

But the commission said switching the devices on when collecting them to see if they are genuine mobile phones cannot be viewed as an invasion of privacy.

Teachers at the school in question check each mobile phone to see if students are turning in fake handsets while holding on to their real ones.

This is the third time the commission ruled that a ban on students’ mobile phone use violates their rights. Earlier, the commission recommended two middle schools revise their total ban. The commission’s recommendations are not legally binding.

Teachers and other school officials insist that the commission’s recommendations “do not reflect reality.” Teachers are complaining that it is unrealistic to collect phones at the start of every class and return them during breaks.

Park Jeong-hyun, a teacher in a middle school in Incheon, said, “If you allow mobile phone use in schools, we will see a surge in illegal photography and cyber-bullying on social media. We already have a lot of problems with students using mobile phones, and the commission’s recommendation will only make things more difficult.”

Others warned the recommendation will only worsen the problem of mobile phone addiction among students. 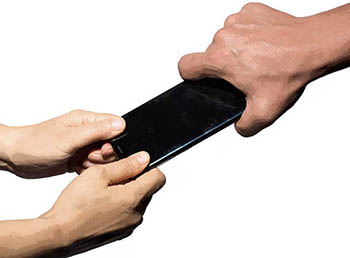