There’s an interesting divide in coverage of Samsung phones in recent years. In the U.S., where Chinese phones are mostly invisible, Samsung has virtually no competition in the Android space. According to a recent study by PC Magazine, more than 90% of phones sold by the four major American telecom carriers in 2019 were either Apple or Samsung devices.

To American tech media, the S20 Ultra is over-the-top powerful, to the point of overkill. It is Samsung further increasing its lead over other Android brands. But to us here in Asia, the S20 Ultra needed to be what it is, because competition from Oppo and Huawei are coming fast and hard.

But let’s ignore the constant back-and-forth of the Chinese smartphone scene briefly and examine the S20 Ultra as a phone. It represents a shift in strategy and philosophy for Samsung. Does it pay off?

If I must describe Samsung’s design philosophy over the past few years, it’d be “curves” and “symmetry.” Beginning with 2015’s Galaxy S6 Edge and maturing into form with 2016’s Galaxy Note 7, and carrying over to last fall’s Note 10, Samsung’s flagship phones had a front and back that were nearly symmetrical in feel—both the front and back glass panels curved at the same angles to meet perfectly in the middle, sandwiching a metal frame. There were almost no camera bumps in most of the phones. They were ultra sleek and elegant.

The S20 Ultra breaks from that. In a surprising move, Samsung has moved away from the curved screens it pioneered, instead opting for a panel that resembles the iPhone’s recent screens—it’s still slightly rounded at the edges, but it’s mostly entirely flat.

The symmetry is gone: the metal frame no longer runs down the middle, and there’s a giant camera bump on the back that sticks out so much the phone doesn’t lie flat on a table.

It’s still a very nice looking phone, but the S20 Ultra is now power over elegance, resembling a powerful machine more than an elegant gem-like slab.

Here’s a rundown of the internals, all with numbers that pop off the spec sheet: powering the phone is a 5,000 mAh cell, processing everything in a Snapdragon 865, with 12 or 16GB of RAM.

The screen measures 6.9-inches diagonally and has a refresh rate of 120Hz, which is twice the refresh rate of any iPhone or previous Samsung phone. This means animations look extra fluid to the eyes. It’s not a must-have feature, but very nice to have. And quite frankly, my eyes have been spoiled by it. After seeing 120Hz on the S20 Ultra (and the Oppo Find X2 Pro), it’s hard to go back to a 60Hz panel.

Samsung’s screen is as brilliant as ever, with vivid colors and excellent max brightness. Though I’d say it’s not accurate to just call it the best display hands down. I think the screen of Oppo’s Find X2 Pro matches up very well with the S20 Ultra’s. I can’t definitely say one is better than the other.

That giant camera module was needed, though, because it houses Samsung’s most ambitious camera offerings ever. The main camera is a 108-megapixel sensor that Samsung produces in-house (instead of using Sony’s more proven IMX sensors like in most models the past few years).

As I’ve written about before, jumping to an ultra-high pixel count like 108-megapixel is a big departure from Samsung’s previous camera philosophy. In mobile photography, higher megapixel count lens are usually intended more for marketing purposes than actual practical use (case in point: the Pixel 4’s and iPhone 11’s 12-megapixel cameras are universally considered superior to any of the 48- or 64-megapixel lenses used by OnePlus or Vivo phones).

The problem with large megapixel sensors is that they need significantly more light to light up the extra pixels, a job which falls on the image sensor, a tiny fingernail-sized chip in smartphones. Jumping from 12-megapixel camera to a 108-megapixel camera would in theory require Samsung to increase its image sensor nine times just to keep up the same low light performances.

The good news is that Samsung has the resources to solve the problem. First, Samsung built its own image sensor, which measures 1/1.33-inch, among the largest ever in a mobile device. (For now, anyway, because Huawei has already teased its upcoming P40 Pro has an even larger sensor)

Then Samsung turned to software: by using a process called pixel-binning, Samsung’s image processing sensors combines nine pixels’ worth of data into one, turning what was supposed to be 108-megapixel photos into a 12-megapixel photo.

This hardware/software combo works: the S20 Ultra’s low light performance is really good, and doesn’t suffer from the high-noise problem that usually plague high-megapixel cameras. See the samples below, all taken without the software-assisted night mode—just point and shoot in auto mode.

Because the image sensor is larger, it resembles a traditional camera shooting with a wide-open aperture. This creates a stronger than usual depth-of-field “bokeh” effect with a shallow focus area. This would be fine if Samsung’s software had been tuned enough to adapt, but it appears to not be the case.

Simply put, the S20 Ultra loses focus on an object more easily than most other recent smartphones, including Samsung’s non-108-megapixel phones. This only happens when I try to take shots of objects up close, or in video when I’m moving around. In the samples below, notice portions of the object was blurry. This happens with regularity, and while after multiple tries I can get the focus just right, it takes trial and error. Samsung has acknowledge the issue and promises a software update that will correct the issue.

Other cameras: some groundbreaking, some gimmicks

The other big camera feature of the S20 Ultra is its “Space Zoom” camera, which is just a fancy marketing term for the “Periscope” zoom lens that Huawei and Oppo have offered for a year already. Samsung’s lens has a higher 48-megapixel count and software that pushes the digital zoom to 100X (Huawei’s maxes out at 50X and Oppo’s 60X).

At 100X, the images are blurry to the point that they resemble an impressionist painting. But I’d argue it’s still useful because it can still provide enough context or information as to what is happening very far away.

For example, in the sample below, the 100X shot, while blurry, does allow me to read the text.

Lower the zoom levels to 10X, 30X, or even 60X, and the images become good enough that they can actually be posted on social media. Remember, phones without this Periscope tech usually maxes out at 10X, just to be able to get 20X-60X that work is nice.

In general, I find the S20 Ultra’s zoom lens slightly superior to Huawei’s P30 Pro (released last year) and Oppo Find X2 Pro, but of course, Huawei is already promising a big jump with the upcoming P40 Pro. Like I said, Samsung has no Android competition in the U.S., but intense competition in Asia.

Rounding out the quad-camera array is an ultra-wide angle lens that works well and a “depth sensor” that does virtually nothing. Apple and Google have already proven phones can take amazing bokeh images entirely with software manipulation, we do not need a dedicated lens just to capture “depth information.”

There’s also a 40-megapixel selfie camera, located in a tiny hole near the top of the screen. It produces bright and lively selfies, but Samsung’s selfie image processing is aggressive in smoothing and whitening skin. This is a look that some prefer, some do not.

The S20 Ultra’s video capabilities are solid. You can record 8K-resolution video, but there’s not much benefit of shooting that high as most screens can’t support it. Stick with 1080p or 4K and videos turn out smooth with good audio—but there’s the occasional lost of focus issue. The iPhone 11’s video capabilities are still ahead though with superior stabilization and auto focus.

Samsung’s Android skin was once universally loathed by smartphone reviewers. It was heavy-handed and clunky and had a bunch of duplicate Samsung apps that does the same thing Google apps do.

Samsung cleaned that up significantly beginning around 2017 with the release of the S8, and the software experience has improved another notch here with One UI 2.0.

There are options to use a white or black UI interface, and the ability to pull the notification shade from anywhere on the screen. Samsung’s battery management is also smarter now, keeping endurance in check despite the power-hungry 120Hz screen without killing background apps.

But after scrapping some of its Samsung bloatware from 2018 to 2019, Samsung has fallen to old habits again. Out of the box, the S20 Ultra includes several Samsung specific apps like a Samsung web browser and a Samsung email app. Neither of these are better than Google’s Chrome or native Gmail app, so I have no use for them.

A swipe right from home screen brings a “Samsung Today” page that shows supposedly relevant information like weather and upcoming appointments, but this page takes a second to load, which is really jarring considering the rest of the phone is fast. The good news is Samsung gives us the option to disable the page, and delete most of the Samsung apps.

The S20 Ultra has a 5,000 mAh cell, which is among the largest in any smartphone right now, but I’ve found battery life to be just okay. The major reason is because the 120Hz refresh rate is very power hungry, and I keep my screen brightness near max as I’m outdoors often. Under this heavy duty use scenario, the phone can sometimes last me a full day, sometimes not.

If I lower the refresh rate to a traditional 60Hz (there is an option for that), then battery life improves tremendously to last a day and half easily. But to buy this phone with the gorgeous screen and not use it to its max potential would be a crime.

So I say keep the 120Hz on unless you are going on a long day out and need to ensure the phone won’t run out of juice.

The Galaxy S20 Ultra has grabbed some unflattering headlines in the West for its high retail price ($1,400 in the U.S. and 1,199 euro in Europe for the base 12GB RAM, 128GB storage model), but Hong Kong consumers will get a better value. Here, a 12GB RAM with 256GB storage (double the storage) retails for HK$10,988, which is around $1,280. I expect prices around the region in Asia to be closer to Hong Kong’s.

For Samsung loyalists or those seeking the most powerful, most maximal phone, the S20 Ultra is going to attract.

In the states, the S20 Ultra will continue to be the king of Android until this summer when the next Samsung flagship is released. Here in Asia, there are various phones that can make that case.

But I think the S20 Ultra is among the top of the pack—as long as Samsung fix that focusing issue. 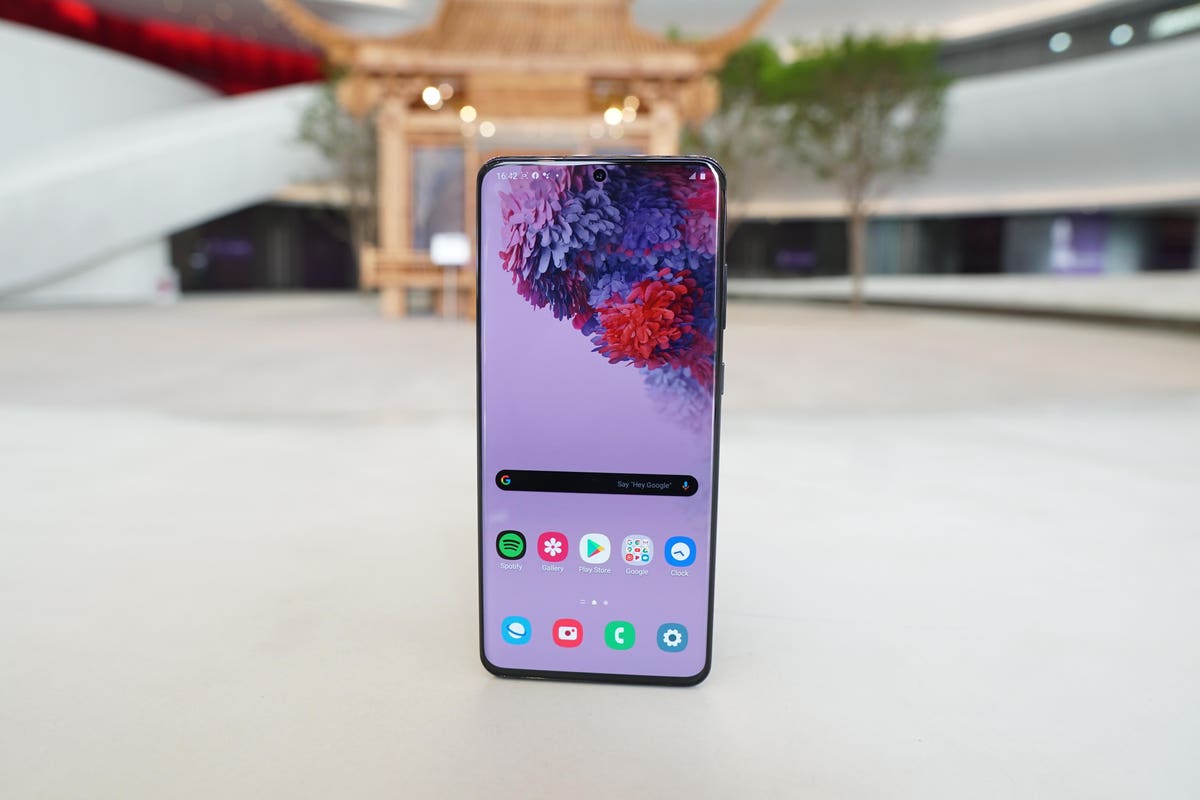