www.smartphonephotography.in See the World through your Smartphone
Home SMARTPHONE Video of Indian flag spotted in pro-Trump rally at US Capitol goes viral

An Indian flag was spotted at the pro-Trump rally outside the US Capitol in Washington on Friday.

Amid the massive protests, which saw people carrying flags of the United States and of ‘Trump 2020’ and ‘Trump 2024’, one person also waived Indian tricolour.

The video of this incident went viral, with several people criticising the act as it was the US’s internal matter and the protesters caused vandalisation in the Capitol Hill.

A user wrote that he appreciates “national pride”, but the act is “ridiculous”.

“What moron was waving the Indian flag there????? I’m all for national pride but this is ridiculous,” he wrote on Twitter.

Senior Shiv Sena leader Priyanka Chaturvedi said one must feel “ashamed” for holding the tricolour “in such violent & criminal acts in another country”.

“Whoever is waving this Indian flag should feel ashamed. Don’t use our tricolour to participate in such violent & criminal acts in another country,” Chaturvedi wrote on Twitter.

This Indian flag amongst this mob is very disturbing. Punish the culprit for disrespecting my country’s flag. https://t.co/m93tyLTrrI

But, in a hilarious post, comedian Vir Das advised the flag bearer that a large crowd does not imply a “cricket match”.

“Dear random Indian dude waving Indian flag at the #CapitolRiots. Every large crowd IS NOT A CRICKET MATCH,” Das tweeted.

Every large crowd IS NOT A CRICKET MATCH!

President Donald Trump also conceded his defeat, despite implying that the election was not fair, saying there will be an “orderly transition”.

“Even though I totally disagree with the outcome of the election, and the facts bear me out, nevertheless there will be an orderly transition on January 20th,” Trump said in a statement. 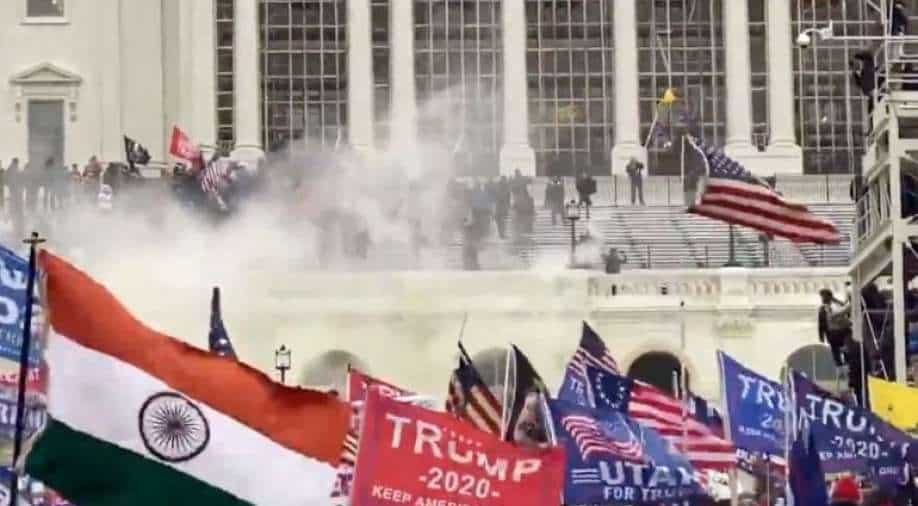