New Delhi: In a strong message to China at the conclusion of the third edition of the 2+2 Dialogue, United States secretary of state Michael R. Pompeo said the US “stands with India to deal with any threat” and expressed his country’s support for India’s efforts to “defend its sovereignty”. He also paid tributes to the memory of the 20 Indian troops killed in a clash with the Chinese PLA at the Galwan valley in the Ladakh sector in mid-June.

At the foreign and defence ministerial level dialogue in New Delhi on Tuesday the two nations inked five pacts, including the Basic Exchange and Cooperation Agreement (BECA) for “greater geospatial information-sharing” between the armed forces of the two countries. This is the third defence pact signed between India and the US in the past four years and it will enable India to use US geospatial intelligence and satellite imagery to improve the accuracy of missiles and drones.

The two nations “shared assessment of the security situation across the Indo Pacific” and decided to boost bilateral cooperation between their navies and strengthening overall defence ties as part of their existing Comprehensive Global Strategic Partnership during the 2+2 talks on Tuesday.

Hinting at China, external affairs minister (EAM) S. Jaishankar also made it clear that the basis for a multipolar world has to be a “multipolar Asia”.

In an obvious pointer to the military face-off with China in the Ladakh sector, the US state department on its website interestingly quoted defence minister Rajnath Singh as saying in his opening remarks at the Dialogue that India is “challenged by reckless aggression on our northern borders”.

Speaking later in the presence of the other three participants of the Dialogue, US secretary of defence Mark T. Esper pointed to the “aggression and destabilising activities by China” in Asia and the Indo-Pacific region. Mr Pompeo promptly added that the ruling Communist Party in China is “no friend to democracy and the rule of law”.

The two visiting US officials also called on Prime Minister Narendra Modi who “appreciated the successful conclusion of the third 2+2 Dialogue” and “expressed satisfaction about the multifaceted growth in the bilateral Comprehensive Global Strategic Partnership in recent years”, the PMO said.

Pakistan also came in for criticism. Calling for concerted action against all terrorist networks, including Lashkar-e-Tayyeba (LeT), Jaish-e-Mohammad (JeM) and Hizb-ul-Mujahideen, an Indo-US joint statement said the four ministers “called on Pakistan to take immediate, sustained and irreversible action to ensure that no territory under its control is used for terrorist attacks, and to expeditiously bring to justice the perpetrators and planners of all such attacks, including 26/11 Mumbai, Uri, and Pathankot”. 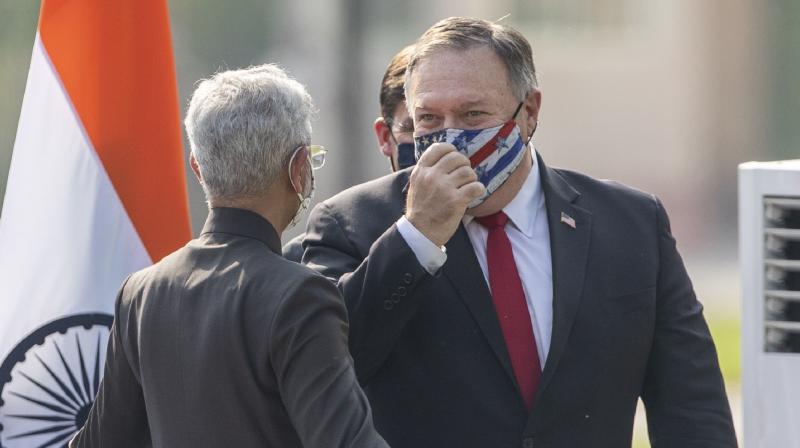